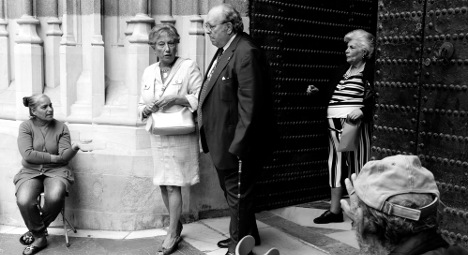 Hot on the heels of an International Monetary Fund report showing that the gap between rich and poor has grown faster in Spain during the crisis than in any other country in Europe, a new Organization for Economic Cooperation and Development (OECD) study sheds more light on the issue.

Here are eight key findings from the OECD's Society at a Glance study 2014 report, released on Tuesday.

1) The income of Spain's richest ten percent dipped by only one percent a year from 2007 to 2010.  But Spain's poorest ten percent saw their income plummet by 14 percent annually in the same period.

2) In 2010, the median income of the top ten percent in Spain was 13 times higher than that of the poorest ten percent — that's against an OECD average of 9.4 times.

3) Spain was responsible for 55 percent of the rise in unemployment across the whole Eurozone from 2007 to 2013.

5) Just over 54 percent of people of working age in Spain had a job in 2013, which is the third lowest rate for the whole OECD.

6) Spain's unemployment rate was two and a half times the European average from 2007 to 2010 but family and unemployment benefits were only just above OECD averages.

8) Spain is second only to Greece in the number of young people aged 15 to 24 who are neither working nor seeking work, or 19.6 percent according to the latest figures.

The OECD recommends a series of measures to help families "once the economic recovery picks up".

These include urgent assistance for the long-term unemployed and poor working age families.

"Access to employment support, retraining and child care should be extended for disadvantaged groups," the study authors argue.

Also on the hit list are the many value-added tax (IVA) exemptions or discounts in Spain, with the OECD wanting an end to "poorly-targeted" lower IVA rates on items including food, energy and transport.

The OECD is an international economic organization with 34 member nations. Their main goal is to stimulate economic progress and world trade.