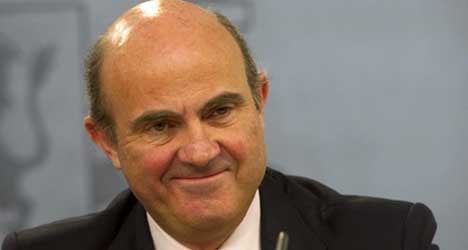 Economy Minister Luis de Guindos smiles as he gives a press conference at La Moncloa Palace in Madrid in 2013. File photo: Eduardo Dieguez/AFP
Spain will post its third successive quarter of economic expansion in the January-March period "with growth which we expect will be at least the same as that which we had in the final quarter of last year," he told a business forum in Madrid.
The Spanish economy, the fourth largest in the eurozone, emerged from recession in the third quarter of 2013 when it posted growth of 0.1 percent.
Growth picked up in the fourth quarter of 2013 to 0.2 percent, adding to signs that the country is emerging from five years of stop-start recession which destroyed millions of jobs.
Spain's economy shrank by 1.2 percent over the whole of 2013, its fourth annual contraction in five years, as the country struggled with the aftermath of a decade-long property bubble that burst in 2008.
Prime Minister Mariano Rajoy said in his state of the nation address last month that he saw the economy growing by 1.0 percent this year and by 1.5 percent next.
The government's growth forecast in the 2014 budget had been for growth of 0.7 percent this year, but a boom in exports led it to upgrade that forecast.
"There will be job creation in 2014, which is a substantial change because it will be the first time that this is the case since the beginning of the crisis," the economy minister said.
Spain's jobless rate, which fell to an historical low of 7.95 percent in the second quarter of 2007 at the peak of it property boom, stood at 26.03 percent in the last three months of 2013.
Rajoy's conservative government, which took power in December 2011, says its labour market reforms, which made it easier for firms to change work practices and cheaper to lay off workers, have stopped the rot in the job market.