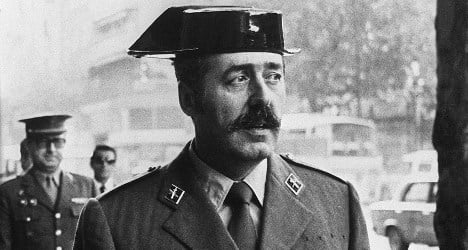 Antonio Tejero Molina led a failed coup against the Spanish state in 1981. His son was removed from his military post on Monday for celebrating the event. File photo: AFP/Europapress

The officer's father, Antonio Tejero Molina, gained infamy in Spain for leading a band of guards who burst shooting into Spain's parliament on February 23rd, 1981, and held lawmakers captive for the night.

Tejero junior was disciplined Monday because "he had an unauthorized lunch in his barracks in Valdemoro, Madrid, with various people involved in the attempted coup d'etat of February 23," the interior ministry statement said.

The coup plotters sought to derail Spain's transition to democracy after the death of the dictator Francisco Franco in 1975.

They failed, partly due to the intervention of King Juan Carlos who rallied other senior officers to his side.

The date of February 23rd — often referred to in Spain as 23-F — became a byword for lingering tension between progressive and pro-Franco forces in Spain.

Officials who asked not to be named said Tejero was removed from his post because he had held the lunch deliberately to celebrate the coup's 33rd anniversary last month.

They said he was removed from his post but not stripped of his rank.

Tejero Molina was sentenced to 30 years in jail for the coup, of which he served half before being conditionally released in 1996.

Spanish newspapers reported that Tejero Molina himself was among those present at the unauthorized celebration. Ministry sources would not confirm this to news agency AFP.