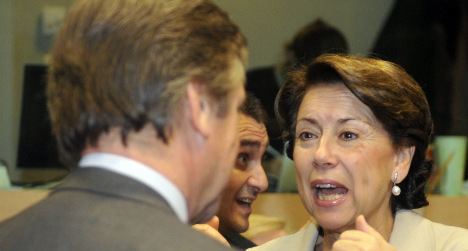 Magdalena Alvarez, a former public works minister, is under investigation over her alleged role in the fraudulent use of public funds used to pay severance pay for companies in Andalusia in southern Spain that laid off workers.

She was drawn deeper into the corruption scandal on Wednesday after the judge leading the probe ordered her to post a bond of €29.6 million ($41 million) to cover her liability in the case.

The alleged fraud — reportedly the biggest public money scam in Spain's history — involved a regional development fund that was used to pay bogus severance payments to dozens of people even though they never worked for the firms in question.

The alleged beneficiaries of the payments were people or companies with close ties to the Socialist Party, which has ruled Andalusia for three decades, or left-wing trade unions.

Over €140 million were either misused or embezzled from the fund between 2001 and 2010, according the Spanish media reports.

The case is one of several corruption scandals involving top politicians and even the royal family that have emerged during a sharp economic downturn when many Spaniards have lost jobs or had to tighten their financial belts.

Spain's ruling conservative Popular Party was hit by allegations last year that its top members, including Prime Minister Mariano Rajoy, for years received secret payments from a party slush fund. The party has denied any wrongdoing.

Alvarez, who served as Andalusia's economy and finance minister between 1994 and 2004, said in a statement that she was "completely innocent".

She added she would appeal the order to post bond of 29.6 million euros, a figure she called "disproportionate", and had not been responsible for how the money of the regional development fund was used.

Alvarez was named as an official suspect in the case in July 2013.

She could face charges of misappropriation of public funds and embezzlement, according to the investigating judge's writ.

Judge Mercedes Alaya considers Alvarez to have been a key player in aid that was given through the fund, which was set up by the regional government of Andalusia to help struggling businesses pay severance to their laid-off workers.

Alvarez's successor as Andalucia's economy and finance minister, Jose Antonio Grinain, stepped down as the president of the regional government of Andalusia last year.

After serving as Andalusia's economy and finance minister, Alvarez served as public works minister between 2004 and 2009 in the Socialist government of then prime minister Jose Luis Rodriguez Zapatero.

The corruption scandal has caused the popularity of the Socialist Party to plunge in Andalusia, a bastion of the left in Spain where bullfighting and flamenco culture are strong traditions.

The party lost its majority in parliament in regional elections in 2012. It now governs the region, Spain's most populous, together with the smaller far-left United Left party.

Two small parties, the centrist Union for Progress and Democracy (UPyD) and the Catalan separatist Esquerra Republicana party (ERC), called on Alvarez to step down from her post, arguing she had damaged Spain's image.

The European Investment Bank said in a statement that it was "following the situation closely" and respected the "presumption of innocence".