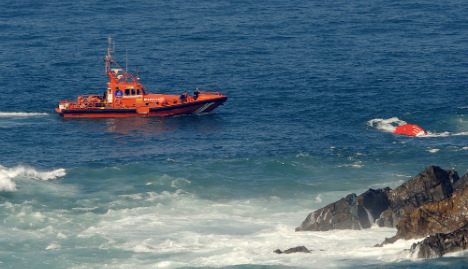 The Portuguese-flagged fishing boat ran aground on Monday. Two of the nine crew were reported dead the same day, one was rescued and the rest were missing.

Rescue divers found the third body on Friday after finally managing to get into the wreck after being prevented by rough weather for several days, a police spokeswoman told AFP.

"The body was in one of the cabins, where no others have been found for the time being," she said.

"The search is ongoing," she added as the other five crew members were still missing.

The third body found was that of Lucas Jose Mayo Abeijon, from the nearby village of Muros on Spain's northwestern coast.

The vessel ran aground on the island of Erbosa, half a nautical mile off Cape Penas in the Asturias region, maritime rescue services said. It was left semi-submerged.

Among the five missing Friday were two Indonesians, two Spaniards and a Portuguese.

The boat's Portuguese captain and a Spanish cook were the first found dead. The one crew member rescued by another fishing boat is from Spain.

The village of Muros, home to Mayo Abeijon and one of those missing, has declared three days of mourning.