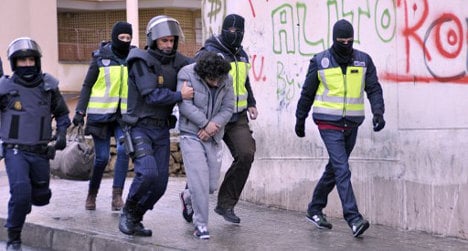 Policemen arrest a suspect of belonging to the jihadist cell in the Spanish city of Melilla. Photo: Blasco Avellaneda/AFP

Security forces arrested four of the suspects in Spain, including the head of the network, and another three in Morocco, in what his ministry called a "hard blow" against extremist killers and kidnappers.

Security forces seized the suspected leader of the ring, Mustafa Maya Amaya, a Belgian naturalised in Spain, as well as two French suspects he is thought to have recruited to send to Syria, the interior ministry said in a statement.

Amaya is suspected of recruiting volunteers on the Internet and sending them to join "terrorist organisations" in countries including Syria and Mali, it said.

"Their ultimate aim was to join as leaders or active participants in attacks and public executions or to die in terrorist operations committed in these conflict zones."

It said one of the main groups involved was the Islamic State of Iraq and the Levant (ISIL), a jihadist faction in Syria with roots in Al-Qaeda's Iraqi affiliate.

The other main ones were Al-Qaeda in the Islamic Maghreb (AQIM) — the network's North African offshoot — and the Al-Nusra Front, a branch of the network allied to rebels fighting against Syrian President Bashar al-Assad's regime.

Friday marks the third anniversary of the beginning of hostilities in Syria. The death toll in the county's civil war is estimated to be over 100,000 although true figures are impossible to ascertain.

Of the suspects arrested in Spain, one was caught in the southern city of Malaga and the other three in Melilla, one of two Spanish-governed cities on the northern Morocco coast, the ministry said.

Morocco's interior ministry said separately that three of the seven suspects were arrested in the Moroccan town of Laroui, just south of Melilla.

The cell was suspected of sending volunteer fighters to Mali, Syria and Libya, it said in a statement.

Morocco was threatened with attacks last year in a video message by AQIM.

The Moroccan ministry said the existence of such cells "clearly shows that Al-Qaeda and its related groups are intent on attacking the stability of the kingdom and its allies".

Spanish security forces meanwhile fear battle-hardened Islamist fighters may return from Syria to Spain under the influence of Al-Qaeda-inspired groups, presenting a threat of attacks.

Some of those arrested in the latest raids "had already returned" to Spain from conflict zones, Fernandez said on Friday. He did not specify exactly when the arrests took place.

Just three days before the latest arrests were announced, Spain marked the 10th anniversary of an Al-Qaeda-inspired bombing of four packed commuter trains in Madrid, which killed 191 people.

"Clearly Spain forms part of the strategic objectives of global jihad," the minister said on the eve of the anniversary.

"We are not the only ones but we are in their sights."

Since the Madrid train bombings, 472 suspected Islamic extremists have been arrested in Spain, he said.

The Spanish counter-terrorist service's alert system is at its second-highest level, signifying "a likely risk of attack". 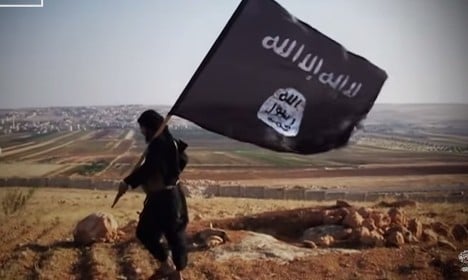