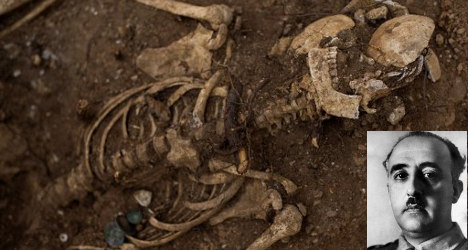 Andalusia wants to excavate land to search for the remains for the victims of Spain's Civil War and the dictatorship of Fracisco Franco (inset). File photo: AFP/Jorge Guerrero

Under a draft law passed by the cabinet of the left-wing regional government of Andalusia, the state will be able to temporarily expropriate land in cases where its owner does not allow a search for a mass grave to be carried out on the property.

The southern Spanish region, a bastion of the left, suffered greatly during Spain's civil war which pitted Franco's rightist forces against an elected left-leaning government.

The war ended with Franco assuming power as a dictator and ruling Spain until his death in 1975.

While Franco's regime honoured its own dead, it left its opponents buried in unmarked graves scattered across the country.

The regional government of Andalusia estimates around 60,000 people went missing in the region during the civil war.

Andalusia's draft law of "democratic memory" also stipulates that statues, street names and other public symbols honouring Franco and his lengthy dictatorship should be removed within 18 months.

If they are not removed within this time, the regional government of Andalusia "will be empowered" to do so itself, it said in a statement.

Under a national law passed in 2007 by Spain's previous Socialist PSOE government, central, local and regional governments were required to strip away such publicly displayed symbols but set no timeline.

But many right-wing local authorities have resisted attempts by campaigners to force them to comply with the legislation.

Andalusia argues the measures in its draft law have the backing of the United Nations Committee on Enforced Disappearances, which last year recommended that Spain uncover the fates of Franco's victims.

Campaigners estimate about 114,000 bodies of people killed during the civil war and Franco's ensuing four-decade rule are thought to lie unidentified in mass graves around Spain.