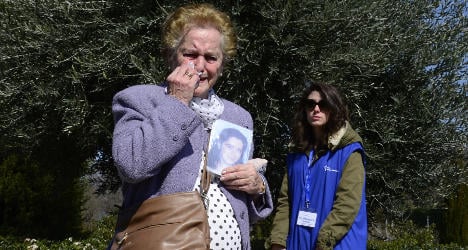 Antonia Santiago García holds a photo of her late daughter during Tuesday's commemoration ceremony for the victims of the Madrid train bombings in Madrid's Retiro Park. Photo: Javier Soriano/AFP
Relatives of those killed on the trains, which were carrying rush hour passengers from Madrid's suburbs when they exploded on March 11th, 2004, wept quietly as the names and ages of the victims were read out at the city's main Atocha railway station.
"Anyone could have been on those trains and anyone could have died on those trains," said Pilar Manjon, the president of the March 11 Victims' Association who lost her 20-year-old son in the bombings, at the ceremony.
"I hope you understand what it is like to wake up and go to bed every day with a vital loss. The enormous effort it takes to accept the inexplicable."
Earlier, victims' relatives and officials filled the pews in the city's Almudena Cathedral for a memorial mass, amid doleful organ music and incense smoke.
King Juan Carlos embraced leaders of victims' associations at the cathedral door.
The archbishop of Madrid, Antonio Maria Rouco Varela, told the congregation that the victims "died and suffered, and we suffer, because there were some who with blood-curdling premeditation were willing to kill innocent people".
After the attacks, however, "love triumphed over hate and life over death,", as Spain rallied round to help the victims, he added.

The series of shrapnel-filled bombs detonated around 7.40am on packed trains headed to Madrid's main Atocha station, killing 191 people from 17 countries and wounding about 2,000.

Spanish courts eventually sentenced 18 people for the bomb attacks. Two of the convicts received jail terms of nearly 43,000 years each.
The seven chief suspects committed suicide on April 3rd, 2004, by blowing themselves up in an apartment near Madrid, also killing a policeman.
On the eve of the 10th anniversary, Interior Minister Jorge Fernández Díaz said Spain still "forms part of the strategic objectives of global jihad. We are not the only ones but we are in their sights."
Since the day of the bombings, 472 suspected Islamic extremists have been arrested in Spain and the authorities' current alert level indicates "a likely risk of attack", he said.
The politics of suffering

The Madrid train bombings changed the immediate course of Spanish politics after Al-Qaeda said they were a punishment for Spain's role in the US-led invasion of Iraq.

The then prime minister José María Aznar's conservative government had immediately blamed the armed Basque separatist group ETA — a move that cost him dear in a general election three days after the bombings.
Voters handed an unforeseen victory to Socialist José Luis Rodríguez Zapatero, who governed until the conservative Popular Party won power again in 2011.
Flowers and candles were left at the entrances to all four stricken railway stations. At the Santa Eugenia station mourners dropped red rose petals on the tracks at 7.38am — the exact time at which the bombs went off a decade ago.
Relatives of the victims also hung garlands of white daisies and released 191 white balloons in the city's Retiro park.
"I am very nervous and anxious on these days," said Isabel Hernando, 52, who broke her ankle in the attacks.
"Those who died were full of life, young people, and I could have been one of them."
Some victims complained of how officials handled Tuesday's commemorations.
"This ceremony has been for the politicians, not for us," said one survivor, Adeniria Moreira, 48, after going up to lay her flowers in the Retiro park.
"We had to go up last, when we should have been first. It was the same in the mass. It is a shame to treat victims that way."
Ángeles Pedraza, leader of the Association for Victims of Terrorism who lost her daughter Miriam in the bombings, said "every day the pain is greater
"Every year is harder because of this eternal pain, which I know will stay with us for the rest of our lives," she added.
Don't miss stories about Spain, join The Local on Facebook and Twitter.