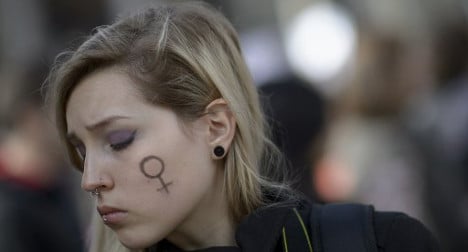 62.3 percent of women in Spain wanting to undergo voluntary miscarriages will resort to desperate means to do so if the draft law is approved. Photo: Dani Pozo/AFP

Spain's Official Abortion Clinics Association (ACAI) has announced that 62.3 percent of women in Spain wanting to undergo an abortion will resort to desperate means to do so if the draft law is approved.

More than 6,000 women were surveyed by ACAI, 30.37 percent of whom answered they would abort in an illegal clinic in Spain and 31.4 overseas in countries like neighbouring France and Portugal.

According to ACAI president Francisca García, the 29.5 percent of women who would continue with their pregnancy would do it "with resignation and anxiety" as they "wouldn't dare or don’t feel capable of opting for something else".

Based on these figures, ACAI believes 30,000 women would travel abroad to have an abortion and another 30,000 would do so illegally in Spain.

"All Gallardón's (Spain’s Justice Minister) law will do is reduce the number of abortions on paper," García told Spain’s version of the Huffington Post.

Only 4.97 percent of abortions in Spain are carried out for reasons relating to the baby or the mother’s health.

Under Spain's new draft bill, women will only be legally able to have abortions if they have been raped or if the mother's health is at risk.

The law has yet to be passed but the government holds a clear majority in the Spanish parliament.

"We will rebel and carry on with abortions. Let the courts decide if our action are within the law or against it," García added.