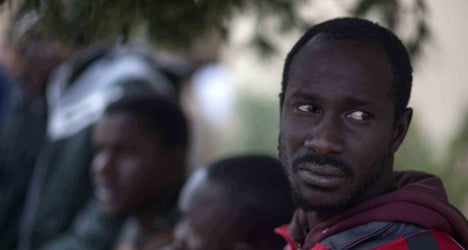 Would-be migrants, allegedly from Guinea and Gambia, part of a group of 15 men who succeeded in scaling the Morocco–Border fence on Sunday night. Photo: Jose Colon/AFP

Fifteen sub-Saharan African immigrants died trying to swim around a breakwater to reach land in Ceuta during the February 6th tragedy.

Local authorities initially denied rubber bullets had been fired by Civil Guard police but later admitted this had taken place.

The decision to fire the bullets has been criticized by some groups who say this caused the 15 deaths. The Interior Ministry has stated, however that no migrants had been injured by the bullets.

But on Monday Spain's Interior Minister Jorgé Fernández Díaz said "after examining the events, it would have been better if rubber bullets had not been fired".

"There had never been an incident like that," the minister said during an interview with Spanish radio station Onda Cero.

"We have learned from the experience and we have given the order that rubber bullets are never again to be used in a dissuasive manner as they were (in that incident)," he told listeners.

But Fernández Díaz stressed that the rubber bullets had only been used to try and dissuade the would-be immigrants. He said the fact that another 23 people had reached the beach "safe and sound" was evidence of this.

"If the intention had been for them not to arrive (on the beach), they wouldn't have," he added.

During the interview, the minister also raised the subject of a 'state pact' on immigration, which was recently proposed by Spain's former socialist Prime Minister José Luis Rodríguez Zapatero.

"It's difficult to say, we have to tackle immigration with EU policy without first dealing with it as a national policy," said Fernández Díaz.

Spain's Interior Ministry recently asked the EU for €45 million ($62 million) in funds to deal with the emergency immigrant situation in Ceuta and Melilla.

Fernández Díaz has also announced that in the coming weeks the Government will spend €800,000 on new fences with anti-climb netting, a measure he claims will be "very effective in preventing illegal intrusions".

The moves come in response to what the minister has described as an "emergency" situation at the borders between Morocco and Spain's two North African enclaves of Ceuta and Melilla.

There have been several massive assaults on these borders in recent months. Police stopped more than 1,600 migrants trying to cross the border from Morocco into the Spanish territory of Ceuta on March 4th, in what was described as the biggest ever such incident.

There are thought to be some 30,000 people waiting in Morocco to enter Europe with the borders at Melilla and Ceuta the most popular options.