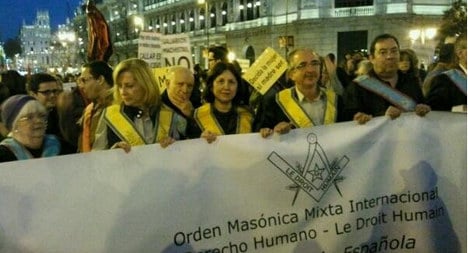 Spain's Freemasonry movement was banned during the dictatorship of Francisco Franco, with members put in prison, tortured and forced into exile.Photo: Twitter

They walked side by side with other protesters wishing to voice their discontent against the ruling Popular Party’s decision to only allow abortion in Spain in cases of rape and severe malformation of the foetus.

"We believe the new law diminishes women's rights and have therefore decided to participate in the protest to defend them," Ana Valet, president of Spain's Mixed Masonic Order told Spain’s Huffington Post.

"Working for mankind’s progress is our slogan," Valet added.

Founded in Spain in 1893, The Human Right Federation has allowed mixed membership from its very beginnings and affiliates across the world now number 30,000 in 60 countries.

The Spanish branch's decision to reveal members' identities on the occasion of International Women's Day would never have been possible in Franco's time, as Spain's former dictator was staunchly against the secret society.

The movement was banned during his rule, with members put in prison, tortured and forced into exile.

It was not until 1979 with the arrival of democracy in Spain that the ban on Freemasonry was lifted.