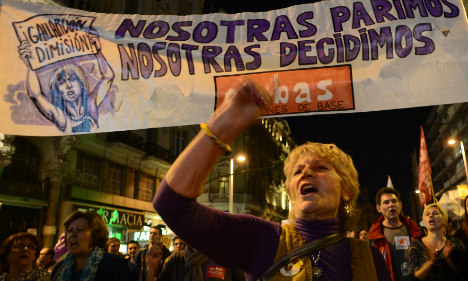 It also reflected anger at a plan by the conservative government to end a right for women to abort on demand up to 14 weeks of pregnancy — a reform that has yet to reach parliament.

"No legislation in our wombs, no mistreatment of our bodies, no cutting of our rights," read one banner in Madrid.

Protesters denounced the abortion plan and the government's 2012 crisis labour reform, which they say is making it harder for working mothers to hold down a job.

"The labour reform and the abortion law are against women," she added. "The right wing wants women to stay at home and look after the children."

"It is the first time I have come, but this year with the abortion reform it was more important than ever," said a protester in Barcelona, Lara Rubio, 23.

The government said on Friday it had approved a €3 billion ($4 billion) "strategic equal opportunities plan" to boost women's labour rights and protect them from violence.

"A woman can feel proud to know that her government is working for real equality for women," the ruling Popular Party's deputy leader Maria Dolores de Cospedal told a conference on Saturday.

"But a great deal remains to be achieved," for example in access to jobs and equal salaries, she said.

The deputy leader of the opposition Socialists, Elena Valenciano, retorted in a televised speech: "The Spanish right wing has never lifted a finger for women.

"Despite the trumpeting of the economic recovery, the job market for women in Spain is an ever-harsher reality."