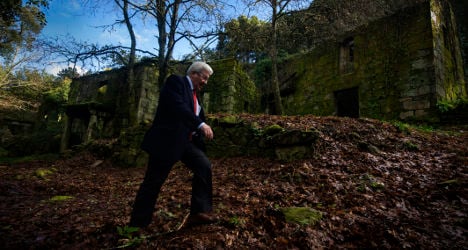 Avelino Luis de Francisco Martinez, the mayor of Cortegada, walking by the ruins of a house in the abandoned village of A Barca, Galicia. Photo: Miguel Riopa/AFP

Local officials in Spain's verdant northwestern region of Galicia hope to give away the hamlet, which is nestled in a hillside overlooking the Mino river near the Portuguese border.

The successful applicant must present a development project for the village, which dates back to the 15th century, that will preserve all of its buildings.

Several proposals have already been made but Avelino Luis de Francisco Martinez, the mayor of Cortegada, the municipality that oversees A Barca, said he would prefer a tourism project.

“Something that would provide work to villagers and local businesses,” he said.

The residents of A Barca left in the 1960s when a dam was built, which flooded their farmland.

But most of Spain's abandoned hamlets have been deserted by residents who moved to larger cities or better land for farming.

Spain's National Statistics Institute estimates that there are around 2,900 empty villages across the country, according to Rafael Canales, the manager of a website specializing in the sale of deserted hamlets called aldeasabandonadas.com.

Over half are in Galicia, a largely rural region that is home to the famous pilgrimage site of Santiago de Compostela, and the neighbouring region of Asturias.

Spain's lengthy economic downturn, which has sent the jobless rate soaring to just over 26 percent, has pushed more owners to put their properties up for sale.

“We count as our clients many writers, painters or rural tourism professionals,” said Canales.

Mark Adkinson, the British manager of a rival online portal called galicianrustic.com, said his company had identified 400 abandoned villages in the eastern part of Galicia alone.

When Adkinson, who is based 150 kilometres (90 miles) north of Cortegada, finds an empty village he starts searching for its owners.

The task is sometimes difficult, even impossible.

Often the owners of abandoned properties moved away long ago and have not been heard from since. In other cases property deeds have been lost and can't easily be found.

“It also happens sometimes that owners themselves come to us and propose putting their property up for sale,” said Adkinson, a former livestock breeder from Lancashire who has lived in Galicia for nearly three decades.

The abandoned villages are especially appealing to foreigners like Neil Christie, a 60-year-old retired Briton who used to work in television.

He bought three stone houses and a granary raised on rock pillars — typical in the northwest of Spain — that make up the hamlet of Arrunada in Asturias for €45,000 ($62,000).

Christie has spent the past four years restoring the main house, located amid green pastures some 30 kilometres south of the Atlantic coast.

He hopes to move in at the end of the year.

“I wanted to flee the stress of London. This was just a bunch of ruins. But I would never be able to buy something similar in England,” he said.

“It is a very pretty region. People are very nice. There is a real quality of life,” he added.

Britons are among the foreigners who have shown the most interest in buying Spain's abandoned hamlets.

“In general, once you cross the barrier of €80,000, the potential buyers are foreigners,” he explained during a tour of the hamlet of Pena Vella, also in the Asturias.

The hamlet, which is on sale for €62,000, is made up of five stone houses with slate roofs surrounded by pine and eucalyptus trees.

“A family used to live here. Some of them made knives, others were carpenters and farmers,” said Rodil Lopez.