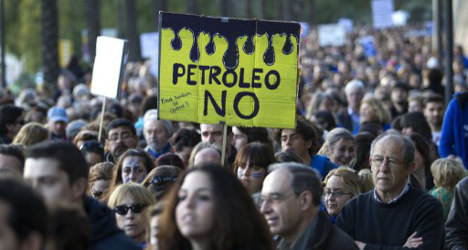 A demonstration in Palma de Mallorca on February 22nd against oil exploration off the coast near the Balearic Islands. Photo: Jaime Reina/AFP

Campaign group Ecologists in Action said in a report that ten oil installations were operating off Spanish coasts and new oil-prospecting licences had been granted for the islands that draw millions of tourists every year.

Carlos Arribas, spokesman for the association in the Valencia region, called the drilling plans "a threat to the integrity of the Mediterranean".

The group said the proposed prospection and certain oil installations already in place off Spain's coasts posed a "constant risk of pollution" and threatened sea species and fishing.

In the Canaries, Spanish petrol giant Repsol is waiting for final authorization to start exploring for oil in its Atlantic waters — a project that has sparked protests by local officials.

According to oil giant Repsol, the deep waters off the Canaries could hold a deposit equivalent to 900 million barrels of oil, or up to 2.3 billion barrels in the most optimistic scenario.

In the Balearic Islands, the company Capricorn Spain Limited, a subsidiary of the Scottish energy group Cairn, is carrying out environmental impact studies with a view to probing for oil.

"There is emphatic social opposition to these prospection projects," said Arribas, citing recent demonstrations in Valencia and the nearby Balearics, which include popular destinations Majorca and Ibiza.

Ecologists in Action said sonic shocks used by prospectors were a threat to species such as sea tortoises, whales and dolphins.

The conservative government is looking to reduce this dependence by developing Spain's own energy production.