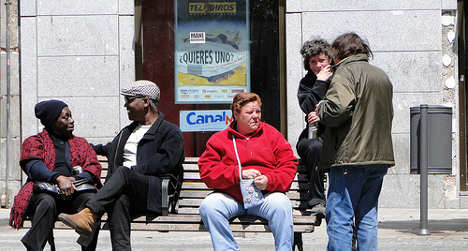 The survey run by Spanish think tank CIS also shows almost half of all Spaniards think the state of the national economy has worsened in the last 12 months. Only eight percent believe the situation has improved.

At the same time the latest monthly CIS poll found that unemployment continues to be the biggest concern for Spaniards, with 81 percent saying it was among the three biggest problems facing the country.

Corruption and the state of the economy are the second and third largest issues facing Spain, according to 2,500 peopled interviewed by CIS in early February.

The latest CIS survey was carried out before Spanish Prime Minister Mariano Rajoy delivered an upbeat state of the nation address highlighting the end of Spain's recession.

In his speech, the Spanish leader also revised GDP growth figures for 2014. "The forecast is that we will reach growth of 1.0 percent in 2014 and 1.5 percent in 2015," he said during the annual debate in parliament, adding that 2014 would also see net job growth.

On Tuesday, Spain's employment ministry also announced positive February job figures with a drop of 1,949 in the number of people looking for work at the country's job offices. That is the first fall in February since the start of the country's crisis in 2007.

But Spain's official unemployment rate remains at 26.02 percent, a fact reflected in the CIS polls.