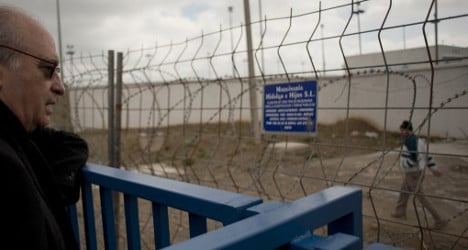 Spain's Interior Minister Jorge Fernandez Diaz looks at the border fence between Morocco and Spain during his visit to Ceuta. Photo: Jorge Guerrero/AFP

The country’s Interior Minister Jorge Fernández Díaz travelled to Ceuta on Wednesday to visit the site where at least 14 sub-Saharan immigrants drowned in February while trying to swim round the breakwater separating the Spanish territory from Morocco.

Fernández announced that in the coming weeks the Government will spend €800,000 ($1,100,000) on new fences with anti-climb netting, a measure he claims will be "very effective in preventing illegal intrusions".

The Civil Guard’s presence at the Ceuta and Melilla borders will also be permanent from now on, with the added "dissuasion and detention" tactic of having a helicopter hovering over the hotspots on a near constant basis.

On Monday, Spain’s Interior Ministry asked the EU for €45 million in funds to deal with the emergency situation in Ceuta and Melilla.

Fernández also highlighted that the controversial razor wire put up on security fences in November of last year was first introduced by the previous socialist government in 2005, as Spain’s version of the Huffington Post reported.

He described it as a "passive" method of dissuasion, despite the serious cuts sustained by many of the immigrants who have attempted to jump the fence.

According to news agency AFP, Spain’s socialist PSOE government took down the razor wire s in 2007 due to the injuries they were causing.

As for the scandal surrounding the Civil Guard police’s use of rubber of bullets in the death of 14 immigrants, Fernández argued the opposition PSOE party were trying to use the tragedy as a means of "wearing down" the reputation of the ruling Popular Party.

Last week a 'verbal ban' was issued by Spain’s Interior Ministry preventing any further use of rubber bullets against would-be immigrants.

The largest assault of migrants trying to cross into Ceuta was recorded on Tuesday, when 1,600 migrants were all detained in the process.