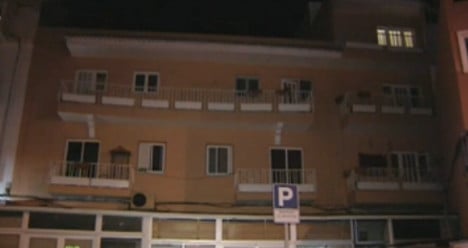 The apartment building in Spain's Seville province where the babies were found. Screengrab: YouTube

The babies were found in two different freezers in Pilas in the southern Spanish province of Seville in November 2012.

An autopsy revealed both the children had been born alive after a normal 40-week pregnancy but died because of a lack of oxygen, probably through drowning, local daily Diario de Sevilla reported at the time.

In a statement to police, the murder suspect — currently in custody — said she had given birth to one of the children in mid-2011. She waited until her partner and her two other children were out of the house to go to the bathroom and give birth, she explained.

She climbed into the bath because "she was scared" and "there wasn't much time", she said.

She added the birth had been very fast and she had turned on the tap so the baby wouldn't hit its head after being born. The baby wasn't underwater "for very long" she told police.

The baby didn't "cry or move" when it was born, the suspect went on to say, which led her to believe it had been born dead. She then put it in a bag and froze it. "I didn't believe it was a good idea to throw it into a container," she said.

The suspect added she had forgotten the date of birth of the other frozen child.

The woman — who gave birth to a fifth child shortly after being remanded in custody — now faces 40 years in prison, or 20 years for the murder of each child.

The case will be heard in Seville's Provincial Court in the next few months.