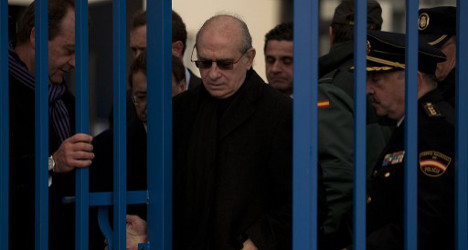 Spain's Interior Minister Jorge Fernández Díaz during a visit to the Spanish enclave of Ceuta in northern Africa on Wednesday. Photo: Jorge Guerrero/AFP

"We are currently seeing a similar pressure from migrants as in 2005 and 2006 when people died in Ceuta and Melilla," said Interior Minister Jorge Fernández Díaz during a visit to Melilla.

This was a "state of emergency", the minister was quoted as saying in Spain's El País newspaper.

The comments come in the wake of an growing number of assaults on Spain's borders.

Police stopped more than 1,600 migrants trying to cross the border from Morocco into the Spanish territory of Ceuta on Tuesday. On February 28th, more then 200 sub-Saharan Africans successfully climbed a triple-layer border fence to enter Melilla.

But the most controversial incident saw 15 would-be migrants die while trying to swim to Spanish territory in Ceuta on February 6th.

Spain's Civil Guard police officers received widespread criticism for their handling of that incident after it emerged they had fired rubber bullets at the immigrants.

Speaking to the press on Thursday, however, Fernando Díaz reiterated his support for the Civil Guard. "Accusing agents is unjust, undignified and immoral," the interior minister said.

On Wednesday, Fernández Díaz announced that in the coming weeks the Government will spend €800,000 ($1,100,000) on new fences with anti-climb netting, a measure he claims will be "very effective in preventing illegal intrusions".

On Monday, Spain’s Interior Ministry asked the EU for €45 million in funds to deal with the emergency situation in Ceuta and Melilla.