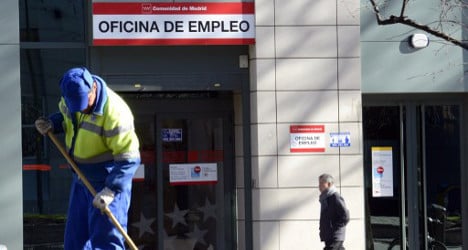 A street cleaner outside an unemployment office in Madrid. File photo: Gerard Julien/AFP

The number of people registered as unemployed dipped by just 1,949 from the previous month to 4.81 million in February, traditionally a difficult month to find work, the employment ministry said in a report.

It was the first decline for the month of February since 2007, a year before Spain's decade-long property bubble imploded, throwing millions of people out of work, flooding the nation in debt and setting it on course for a double-dip recession.

"They reaffirm the trend of the past months, which has enabled us to have 222,736 fewer people registered as unemployed than a year ago," she said in a statement.

If the figures are corrected to smooth out seasonal fluctuations, the number of people registered as unemployed fell by 55,353 month-on-month in February, the government report showed.

A broader, quarterly household survey by the National Statistics Institute shows that Spain's unemployment rate rose to 26.03 percent in the last three months of 2013.

IMF chief Christine Lagarde told a conference in Bilbao, northern Spain, on Monday that Spain's economy, which emerged slowly from a two-year downturn in the second half of 2013, had "turned the corner" but warned it must now focus on creating jobs,

"Creating jobs must be the overriding priority for policy makers," she said, urging Spain to deepen its labour market reforms, notably by lowering the tax costs of hiring new, low-cost employees.