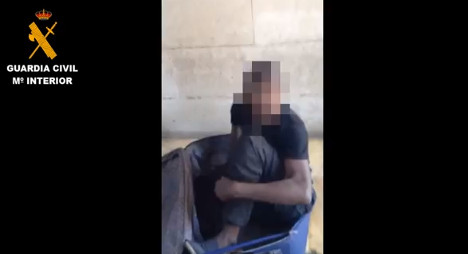 Screenshot of a video filmed by Spain's Guardia Civil Police as they open the case where the young sub-Saharan immigrant was hiding.

Spanish Civil Guard Police at the border between Melilla and the Moroccan town of Beni Ansar noticed on Sunday how a man struggled to pull a large suitcase with unevenly distributed weight.

The suspect, a Moroccan national who resides in Spain, continued to drag the heavy case with haste despite being pursued by Spain’s border control guards.

Once the officers caught up with the man, they were able to arrest him and reveal the contents of the suitcase.

Inside they found a contorted 19-year-old would-be migrant from Mali.

Both men have been remanded in police custody until further notice, Spain’s Interior Ministry reported on Sunday.

Tensions at the borders have been high since at least 14 migrants drowned in Moroccan waters on February 6th while trying to enter Ceuta.

Spanish security forces were slammed by human rights groups and witnesses after firing rubber bullets at the immigrants, sparking a heated debate in Spain.