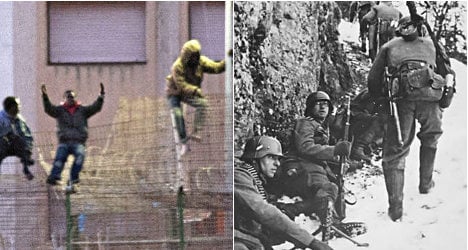 A book published in 2012 revealed the extent to which Sweden helped Nazi Germany in its invasion of neighbouring Norway. Photo: Blasco de Avellana/AFP and Wikimedia Commons
La Razón's editor Fernando Marhuenda made the comments during a heated debate on Spanish TV Channel La Sexta on Saturday.
His words were directed at Swedish EU Home Affairs Commissioner Cecilia Malmström, who recently criticized how Spain is handling the African immigration issue.
A supporter of Spain's conservative ruling Popular Party, Marhuenda openly criticized the EC Commissioner after she called into question how Spanish Civil Guard police handled a February 6th incident in which at least 14 migrants drowned  when trying to enter the Spanish enclave of Ceuta.
Although Spanish security forces initially denied having fired rubber bullets at the immigrants that died, they have since come out and admitted that artillery was used to dissuade the migrants from crossing.
Malmström argued that the rubber bullets "weren't fired directly at them, but the panic it caused led 15 people to drown at sea".
"To that Swedish commissioner you like so much…Sweden let Nazi tanks in so they could then occupy Norway," said Marhuenda on Saturday.
"What Spain has to do, and I mean it ironically, is get the 30,000 or 40,000 immigrants who want to come to Spain, stick them on a train and send them off to Sweden!" Marhuenda shouted.
"Straight to Malmström's home and those of other left-wingers."
A book published in 2012 by Norwegian journalist Espen Eidum revealed the extent to which Sweden helped Nazi Germany in its invasion of neighbouring Norway.

"The Germans used the Swedish rail network on a large scale during the fighting,” Eidum said following the release of his book Blodsporet, ‘The Blood Track’.