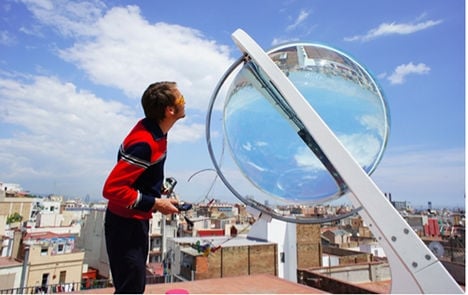 A few years ago Andre Broessel had an idea he believes could revolutionize the energy sector.

"I was watching my daughter put a marble in an egg cup,” he told The Local recently. "It was a Sunday and I saw the focal points moving on the sphere, and a project was born."

The end result is a giant see-through sphere hanging in a bracket which squeezes energy out of the sun. It's known as the Rawlemon.

"The sphere collects sunlight and converts it into energy," he said, adding that it could even collect and convert moonlight, although not enough to power anything.

An eye, he said, works in a similar way. The spheres, made from glass and acrylic, have no photovoltaic cells like a regular solar panel. They simply act like lenses to focus energy from the sun.

And unlike regular solar panels, which not only take up a lot of space and do not, arguably, look as good as Rawlemon, a sphere can remain stationary.

"It was this optical tracking that was the real breakthrough,” he said.

"We're in talks with manufacturers in Taiwan, and I think we have sorted something," said the 46-year-old architect who has lived in Barcelona for the last 13 years after deciding he wanted to see the world when he completed his studies.

In 2008 his clients started asking for smart, energy-saving technology for the homes he was designing for them, and he began putting his plan into action.

Nearly six years later with German government money and a successful crowd-sourcing campaign which has already raised $166,000 (€120,500), Rawlemon should soon be ready to power a house.

"A household with two adults and two children would need about three spheres to provide all their daily energy. This would cost about €10,000" said Broessel. This would mean minimal to no energy bills.

Born near Düsseldorf, the father-of-two hopes his invention will offer a more environmentally-friendly energy alternative which could prove especially popular as Germany and Europe shift over to more renewable energy.

“I am currently waiting to see if I will get the model patented,” he said. “I was the first person to make something like this, and I'm sure I'll get the patent,” said Broessel. “I fought for it."

He admitted that what his small company with its international workforce needed at this point was an industrial partner.

“We need this to overcome the costs of the first two to three years and to reach competitive prices,” said Broessel.

But there is another problem that stands in Rawlemon's way: "The energy industry is trying to block our project".

"We have met with a large Spanish energy company, but they did want to give us funding. They were more interested in taking our project over than becoming partners," he said.

For now, all Broessel can do is make contact with power companies – meetings with a few in Spain are already lined up – and hope for the best.

"We don't receive any money from the Spanish government although we are offering an energy source which is twice as efficient," the architect said.

"We are too small," he explains. "The subsidies go to companies of more than 50 people and if you don't have connections, it's hard to make the most of the opportunities".

Spain is not made for inventors".

Broessel is also critical of the Spanish Government's U-turn on solar power.

In the mid 2000s, Spain was luring solar energy companies to come and invest in Spain. Now though, in a controversial move, the government is looking to make people pay for the privilege of having solar panels.

But Broessel is sticking with Spain despite the obstacles — and not just because he has children here.

"Because of its environmental conditions, Spain could be a world leader in renewables, and in providing renewable energy," he said.

"The country could help provide a more stable Europe" in terms of energy politics, he added.

"I also think one of the causes of Europe's crisis is the lack of industrial production and facilities here and that's why I want to produce here in Spain."