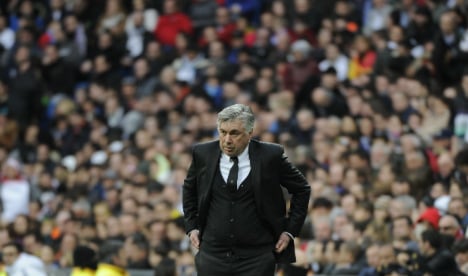 Atletico have yet to lose at home in La Liga, but were comprehensively beaten by Real in both legs of their recent Copa del Rey semi-final as Los Blancos progressed 5-0 on aggregate.

In the second leg of that tie Cristiano Ronaldo was hit on the head by a lighter thrown from the Atletico fans, whilst a number of clashes between the players in the first leg at the Santiago Bernabeu were also criticised for lacking sportsmanship.

With Real sitting just three points ahead of Atletico at the top of the table, Ancelotti is expecting a fiery atmosphere at the Vicente Calderon.

However, the Italian is hoping that passions don't spill over into more unsavoury scenes.

"Tomorrow will be an intense game. That is normal, but I don't think it will be ugly," he said.

"We will try to play our football. To take control of a derby you have to play as well as you can.

"We have a three-point advantage, you could say that we are favourites, but they are playing at the Calderon and the fans help them a lot."

Real come into the game in top form on the back of a 27-game unbeaten run in all competitions and having thrashed Schalke 6-1 away in the Champions League on Wednesday.

Gareth Bale had arguably his best night in a Madrid shirt in Germany as he scored twice and provided two assists as Ronaldo and Karim Benzema also scored twice.

And Ancelotti said Bale is growing in confidence after an injury plagued campaign.

"He is returning to a very good level mentally and physically and you can see that on the pitch. He scored a great goal against Elche and he played very well against Schalke.

"His confidence is improving as is the way he combines with the rest of his teammates."

Ancelotti has no new injury worries as long-term absentee Sami Khedira is the only first-team player unavailable.

Diego Lopez will again replace Iker Casillas in goal from the side that started in midweek, whilst Raphael Varane and Alvaro Arbeloa are also in contention to start.