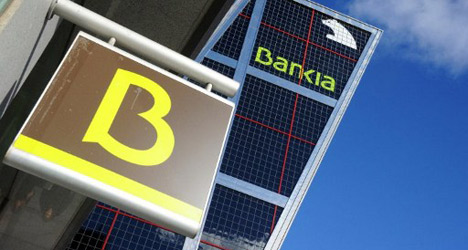 Bankia was forged from the ruins of seven struggling savings banks in 2010 then nationalized in 2012, at a cost to Spain of €20 billion ($27 billion), to avert its collapse into bankruptcy.

Some 30 former Bankia executives are being pursued in the courts for fraud, embezzlement and falsifying accounts.

The 2012 rescue required Spain to request an EU bailout of €41.3 billion for its banking sector, which had been in crisis since the bursting of a property bubble in 2008.

As part of the deal, the European Union gave the Spanish government until 2017 to sell its 68 percent stake in Bankia, the fourth-biggest Spanish bank by capitalization.

Now trading in its shares has been suspended early on Friday as privatization of the company got under way, Spain's market regulator CNMV said.

The bank support fund, acting on behalf of the Spanish state, has begun the privatization with the sale of 7.5 percent of the shares worth about €1.36 billion ($1.865 billion).

That valuation is based on the closing price of Bankia shares on Thursday of €1.58.

Three banks, the London branch of Deutsche Bank, Morgan Stanley and UBS were in the process of placing the 7.5 per cent stake privately with qualified investors, UBS said in a statement to the CNMV late on Thursday.

The operation was not expected to take more than a day.