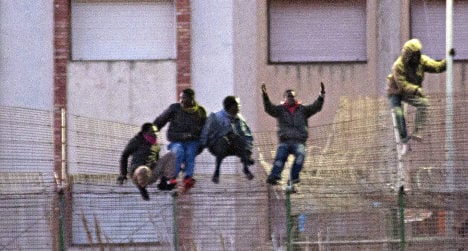 Migrants climbing the border fences between Morocco and the Spanish enclave of Melilla on Friday. Photo: Blasco De Avellenada/AFP

Approximately 300 people launched the dawn assault to  cross into the Spanish city, which lies on the northern tip of Morocco, and 214 made it across, according to authorities.

"They were singing songs of joy through various parts of the city," the Spanish government authority in Melilla said in a statement.

The assault reportedly began at 6 am as migrants assembled on the Moroccan side of the border.

"The crossing was marked by throwing of all kinds of objects — stones, sticks and bottles — at police," the statement said.

It said one Spanish officer was grazed on the scalp and another lightly bruised on the leg.

It was the latest in a series of coordinated assaults by African migrants on the border of Melilla, which along with fellow Spanish territory Ceuta has the European Union's only land borders with Africa.

The two cities sit across the Mediterranean from mainland Spain, surrounded by Moroccan territory.

At least 14 migrants drowned in Moroccan waters on February 6th while trying to enter Ceuta by sea after several hundred tried to storm the land border.

In that incident, Spanish security forces were accused by human rights groups and witnesses of firing rubber bullets at the immigrants, sparking a heated debate in Spain.

This week, Spain's interior ministry said it had banned border guards from firing rubber bullets to stop migrants crossing the fence into its north African territories.

The ministry said civil guards fired rubber bullets, but denied this action contributed to the drownings.

The 480 person-capacity immigration centre in Melilla has overflowed in recent days, brimming with more than 1,000 people.

On February 17 about 150 African migrants made it into Melilla in another mass assault by migrants bearing sticks and stones.

Some 500 migrants stormed the fence on Monday and about 100 made it over in what an official described as a "very violent" assault that left 27 people injured.