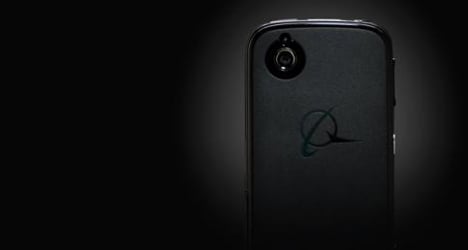 Anyone who buys the top-secret device will be forced to sign a confidentiality agreement. Photo: Boeing

With a specification sheet more suited to 'Mission Impossible' or a James Bond movie than a tech conference, it was no surprise the 'Boeing Black' wowed crowds at the recent Mobile World Congress in Barcelona.

Although Boeing are keeping tight-lipped about the full capabilities of their new 'spy phone', they have let slip some basic facts.

The Android-based phone can encrypt calls, protect stored information and even 'self-destruct' by deleting all data if anyone tampers with the casing.

Slightly bigger than an iPhone, it has two SIM cards instead of the usual one, to connect to multiple phone networks at once.

Apart from that, they are saying nothing. In fact, the phone's technology is so top-secret the Chicago-based firm have asked the US Federal Communications Commission to keep the details "permanently withheld from public inspection."

They wrote, "Boeing's Black phone will be sold primarily to government agencies and companies engaged in contractual activities with those agencies that are related to defence and homeland security."

Anyone who gets their hands on the phone will have to sign a confidentiality agreement.

To make sure that the phone was safe for secret agents to use, the American company handed over the prototype to a Spanish laboratory belonging to  AT4 Wireless for tough testing.

The Spanish firm's Malaga-based lab said recently the phone had met the US tolerance standards for radiofrequency emissions.

Now Boeing can be sure stray radio signal from the phone won't send planes falling out of the sky, it will be examined further in the US before being approved for use in the field.

The phone's encryption technology could have prevented a diplomatic crisis earlier this month by preventing the eavesdropping of US diplomat Victoria Nuland's highly embarrassing phone call to the US ambassador in Ukraine, in which she told the EU in no uncertain terms where to go.

Cybersecurity is a hot topic in the mobile world right now.

Spanish smartphone firm Geeksphone has linked up with Silent Circle, a US encryption company, to produce the Blackphone.

Although not fitted with movie-style self-destruct technology, the Madrid-based company's phone is designed to be highly secure and is already available for pre-order.