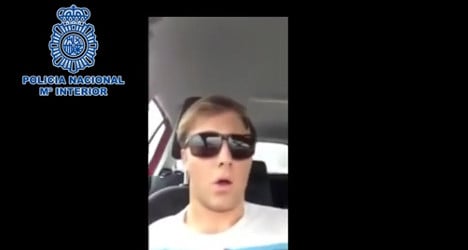 Spain's police force's took to the Twittersphere after they came across the 36-second video of the man behind the wheel.

In it, he can be seen grinning and and talking to a non-existent driver.

Within 13 hours, over 40 followers replied to the tweet, the driver was identified, and the criminal turned himself in.

He is a 20-year-old Spanish born student of French nationality.

Spain's police twitter account also played a key role in the recent capture of a murder suspect, just 12 hours after the National Police Corps sent out a tweet with his photo and description.

The Policia Nacional, as they are known in Spain, are known for their active social media presence.  Their light-hearted tweets and regular replies have earned them over 700,000 followers on Twitter.

In January, the force captured plenty of attention when they tweeted drug smuggling tips to their 700,000 plus followers.

Police soon removed the humorous 'advisory' messages and sent out a new tweet saying: "To avoid any confusion: possession and consumption of drugs in public places does result in fines."