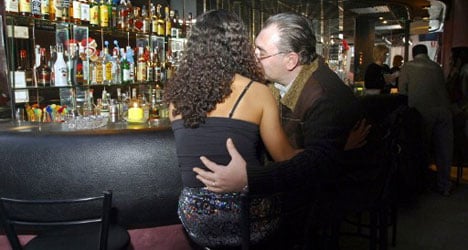 Brothels and roadside prostitutes are common sights in Spain but opponents say that most are controlled by criminal gangs. Photo: Raymond Roig/AFP

The four-hour, €45 ($61) course was organized by sex worker Conxa Borrel of the non-government organization Aprosex organization on February 22nd.

Its stated aim was to help prostitutes avoid risks and be better professionals in order to ply their 'oldest trade' more successfully.

The controversial course attracted a great deal of attention from media outlets in Spain where prostitution is not a criminal activity but pimping and soliciting are.

There was even a debate on Spain's national TV broadcaster RTVE, which had to abandoned when Borrel walked off the set after receiving heavy criticism from lawyer and feminist Lidia Falcón.

Now Falcón and a group of politicians, architects, historians, writers and lawyers in Spain's Catalonia region are demanding explanations for both the course and for the “propoganda-like” media coverage it attracted, according to Spanish daily Publico.

They want assurances from the region's parliament that no public subsidies were used to support Aprosex, which also runs 'sex workshops' and offers 'Tips for beginners' on its website.

The opponents have also questioned  attitudes in Spain which they say leave prostitution in the hands of criminal gangs.

Brothels are a common sight in Spanish cities and prostitutes, often scantily-clad at most, line many roadsides throughout the country.

María Ángels Viladot, a consulting professor in social psychology at the Universitat Oberta de Catalunya, said, “It's a subject that's been covered  by the media as if it were completely normal, when 95per cent of prostitutes are victims of gender abuse.”

She added: “It's worrying that they don't take serious action and that a woman can come out saying that prostitution has to be normalized.”

Viladot rejected Aprosex's claim that the economic crisis was driving women into prostitution and said, “A course like this is just a vindication for prostitution right now.”

Journalist Carmen Freixa told Público that the media coverage had been “indecent” and added that “public media shouldn't publicize this sort of initiative that undermines the rights of women.”

Freixa explained that her goal and that of others in Catalonia was to have prostitution abolished and wanted European law changed “to stop Spain being the whorehouse of Europe”.

She wants the criminal gangs who are said to control the lives of many prostitutes prosecuted, as well as their clients.

“Prostitution can't been seen as a Job. It's unworthy,” she said.

The controversy in Spain comes in the midst of an intense Europe-wide debate over the legal position of prostitution.

On Wednesday, MEPs backed a non-binding resolution which would see the buying of sexual services criminalized, but not the selling of sex.

The resolution puts added pressure on EU member states to shift their position on prostitution.