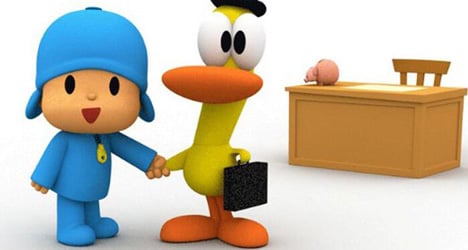 Pocoyo's producers have failed to shake on a deal with one of their creditors. Photo: Twitter

Pocoyo (which means 'little me' in Spanish) is beloved by children and parents around the world.

The animated character is seen on TV in over 25 countries around the world, including Britain and the United States.

The English-language version is voiced by the British actor Stephen Fry.

Dressed in a blue outfit and matching hat with earflaps, Pocoyo dances to music from magic flowers and learns simple moral principles through adventures with his friends Elly, a pink elephant, and Pato, a grumpy yellow duck.

But its Spanish production company, Zinkia, said on Wednesday that it had failed to reach a deal with one of its creditors which holds a loan against the company worth €2.5 million ($3.4 million).

“The board of directors has decided to enter into a reorganisation of its debt with creditors” to protect its assets, it said in a statement to the Spanish stock market regulator.

Zinkia has debts of €11 million, according to Spanish media reports.

The company applied at the end of October for a court to oversee negotiations with its creditors, a move which under Spanish law gave the company four months to refinance before entering bankruptcy protection.

“Zinkia is still negotiating with different creditors and potential investors in order to complete some transaction that shall accelerate the end of this insolvency proceeding,” it said in the statement.