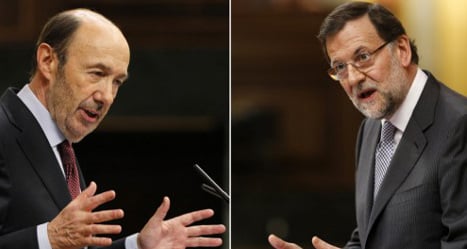 The polls in major national daily newspapers El País and El Mundo show the prime minister outperformed opposition leader Alfredo Pérez Rubalcaba during debates which focused heavily on the economy, and on the question of Catalan independence.

Some 32.4 percent of people surveyed by the right-leaning El Mundo newspaper gave the Popular Party (PP) prime minister the honours for his upbeat performance in the debate, while 26.8 percent said the socialist Rubalcaba had done better.

The El Mundo poll showed 67 percent of PP voters of favoured Rajoy and 54 percent of PSOE voters put their hands up for the leader of the opposition.

Results were much closer in the left-leaning El País. A total of 27 percent of people surveyed by the paper said the Spanish leader had won the debate, only 2 points ahead of the score notched up by Rubalcaba.

This 2 percent difference is the same margin seen in the latest El País poll on voting intentions for Spain's general elections — although the situation is reversed between the two parties.

That poll, published in early February, put support for the ruling PP at 30.8 percent while that number was 31.7 percent for the PSOE.

Some 78 percent of PSOE voters expressed their disapproval of Rajoy's performance in the poll, while that figure was 42 percent among PP voters.