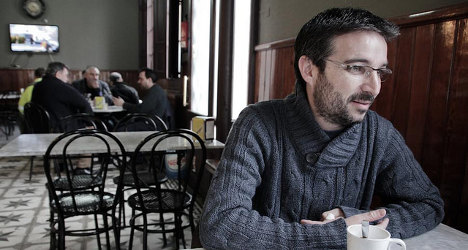 The straight-talking, unassuming, 39-year-old from the Spanish region of Catalonia is loved by millions of viewers for gently but firmly asking politicians and crooked businessmen the questions that the public would love answers to.

His Sunday night show Salvados is a regular fixture for many people across Spain.

Has he uncovered another scandal?

Not exactly; this time he's created one. Évole's latest documentary, Operación Palace, stunned 5.2 million Spaniards on Sunday as they watched a version of a key historic event that they'd never seen before.

They had tuned in because of Évole's reputation for stripping away the lies around political deals and shady business to reveal the truth.

He had promised something shocking, and he delivered.

Spain's King Juan Carlos has long been credited with helping to keep  the country's newly formed democracy alive since February 23rd, 1981, when he opposed a military coup, now known as 23-F.

Évole's documentary created a massive furore on social media as people learned that the coup had apparently been staged, and that the King himself had been complicit in the deception.

A section of the false documentary in which interviewees explain that the coup leader Colonel Antonio Tejero didn't know the coup was staged.

But near the end of the programme came the twist: the deception was in fact Évole's. The 'documentary' was fiction.

What was the reaction?

Opinions have been sharply divided. Evolé himself defended the 'mockumentary' as a 'game' and an 'experiment'.

At the end of the show he delivered a shot to the credibility of Spain's under-fire media when he said, "At least we admitted that it (the documentary) was a lie. In the news we watch every day there are deliberately false reports and no-one says a thing. We wanted show how vulnerable we are to the media."

He later told Catalan daily El Periodico, "In the age we live in, with the tsunami of information that lands on our heads every day, you have to tell the viewer that they should look at everything from a distance, contrast, seek other opinions.

If after watching there's someone who now thinks that they should be more choosy about the information they receive, then I consider the experiment a success."

Many of Evole's famous fans agreed with him.

Journalist Juan Ramón Lucas wrote, "I can't remember anything as good since Orson Welles' The War of the Worlds," and TV presenter Andreu Buenafuente described it as "brilliant".

On the other hand, Alfonso Guerra, the only current Spanish parliamentarian who was actually there on the day of the 23-F coup attempt, described it as "a monumental farce" and that "not even Goebbels (Hitler's minister of Nazi propaganda) could have done better."

Not necessarily. Although the show was the highest-rating non-sports programme on La Sexta TV channel, it seems to have cost him as many fans as it gained him.

Pilar Garcés, writing in the Majorca daily Diario de Mallorca, summed up the disillusionment that many 'Évolephiles' felt after having the wool pulled over their eyes.

"Deceit is deceit, whether it's Luis Bárcenas (the jailed former treasurer of Spain's government and hub of an ongoing political scandal) or Jordí Évole."

"The journalist I had pegged as a good guy, responsible and professional, changed sides and went in search of an audience instead of the truth," she added.

She asked what the reaction would be if those Évole habitually interviewed used the excuse of simply wanting to provoke a debate to excuse their actions and accused him of having "gone over to the dark side".

The diminutive and amiable Évole cuts an unlikely Darth Vader figure but his viewers — however many remain — will be watching with interest to see what he does next.