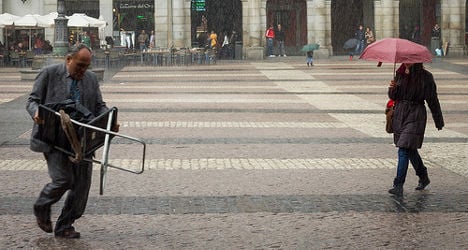 "It's not usual" to have so many days with weather warnings, a spokesperson for Spain's meteorological agency AEMET said on Thursday. Photo: Rafa Luque

After three months of storms, floods and heavy snowfalls, Spain is finally expecting some respite. Spain's meteorological agency AEMET have given the peninsula and the islands the all clear for Thursday

"It's not usual" to have so many days with warnings, a spokesperson for the agency told Spanish paper 20 minutos said of the long stint of wild weather.

The number of 'red' warnings for extreme weather conditions had also been unusually high, the meteorologist added, referring to AEMET's colour-coded warning system.

Among the most dramatic weather phenomena were wild storms on Spain's Atlantic coast and in the Canary Islands.

These resulted in several deaths including several members of the same family who were swept away by waves after gathering on the Galician coast to spread the ashes of a dead relative.

The year to date has also been wetter than usual: the city of Santiago de Compostela in the northern province of Galicia has lived up to its rainy reputation: it experienced rainfall on every single day for the first 41 days of the year.

The Galician capital of La Coruña, meanwhile, has had three times more rain than it would usually have since the beginning of October 2013.

But Aemet also said the 12 months in Spain since February 26th 2013 have only been slightly wetter than average.

And today weather? A rain front will move eastwards bringing some wet weather and snow at higher altitudes. The maximum temperature in La Coruña will be 16 while Barcelona can expect 15 degrees and Madrid 11.