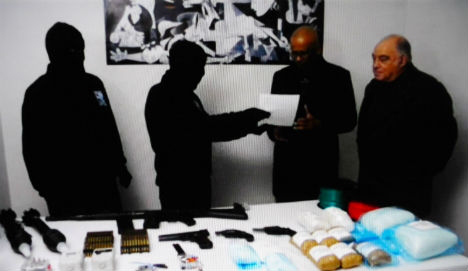 Members of the International Verification Commission with masked members of Basque separatist group Eta in an undisclosed location in January. Photo: AFP/Niaz

Rajoy insisted the group disband unconditionally despite its pledge last week, in response to questions from Basque politicians in parliament.

"We do not have to give them anything in return for disbanding," Rajoy said during the state of the nation debate.

International monitors last week said they had overseen the decommissioning of a small cache of weapons by the group, but Rajoy's government shrugged off the claim.

Eta is blamed for more than 800 deaths in its armed independence campaign. It is classed as a terrorist group by the United States and the European Union.

Members of the monitoring commission were summoned to court after the weapons announcement to be questioned about their contacts with Eta members.

Rajoy drew fire from Basque leaders in parliament for sticking to his stance of refusing to negotiate with Eta.

Mikel Errekondo, a spokesman for the independent Basque coalition Amaiur, said Rajoy had "insulted" the monitors of the International Verification Commission.

"If your government is incapable of solving the problems of the political conflict it faces with the Basque people, you should disband," Errekondo said.

Eta announced a "definitive end to armed activity" in 2011 but has not disbanded as the Spanish and French governments demand.