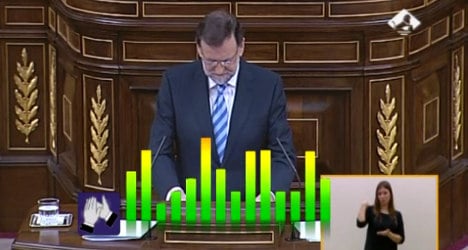 Rajoy received 36 bursts of applause during his 85-minute speech on Monday, beating his own record of 24 from 2013.

It was enough to make Spanish comedian and TV and radio personality tweet that many members of his conservative Popular Party (PP) had woken up with injured hands.

During his address, Rajoy focused heavily on Spain's exit from recession and promised job growth and tax cuts for individuals and companies.

"Spain was seen as a burden for Europe and now it is seen as a motor," he said during an annual state of the nation address.

"The possibility of a rescue, of abandoning the euro, the lack of confidence, are words that no longer deserve a mention" he said.

His comments about the dangers of falling into "triumphalism and complacency" were greeted with howls of derision from the opposition benches.

Rajoy's speech was then followed by another from the leader of Spain's major opposition socialist PSOE party, Alfredo Pérez Rubalcaba.

"What country do you live in?" said the socialist chief, as he launched a direct — largely improvised — attack on the government.

He went on to criticize the Spanish Government for its economic management, citing the destruction of 184,000 jobs, labour reforms that had seen salaries drop by 10 percent, and the increase of children in risk of poverty.

Rubalcaba also took Rajoy to task for a proposed abortion law which "will damage women's health".

The head of Spain's centrist Union for Democracy and Progress, Cayo Lara, meanwhile, slammed Rajoy's PP for legislating for the "business elites" and the banks.

"The rich are richer and there are more poor people," said Lara who highlighted Spain's 26 percent unemployment rate.

The popular politician also called on Rajoy to repeal the proposed law on abortion.

Lara went to demand once again the resignation of Spain's interior minister Jorge Fernández Díaz after an incident on February 6th in which 15 immigrants died while attempting to reach the Spanish enclave of Ceuta.

More cautiously positive about Rajoy's speech was the president of Catalonia, Artur Mas.

Despite dismissing the idea of a planned Catalan referendum on the issue of independence for the region with breakaway aspirations, Rajoy commented he was "open to dialogue" on the issue.

Rajoy's speech comes in the context of falling popularity for his PP government.

A survey published by Spain's left-leaning El País newspaper in early February showed his party had fallen behind in the polls. Support for the PP has slumped from 44.6 percent in the general elections of 2011 to 30.8 percent.

The PSOE vote has climbed from 28.7 percent to 31.7 percent in the same period.

Some 78 percent of voters expressed their disapproval of Rajoy's performance in the poll, while that figure was 42 percent among PP voters.