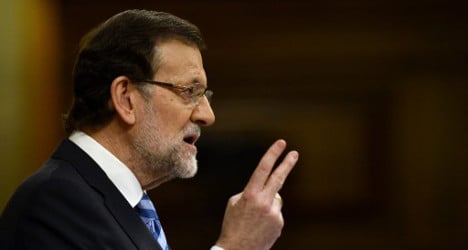 "This referendum can't take place, it is not legal," he told parliament during an otherwise largely economy-focused annual state of the nation debate.

Last month Catalonia's lawmakers voted to demand the right to hold a referendum on declaring independence from Spain, flying in the face of outright opposition in Madrid.

Catalan political chief Artur Mas's ruling coalition and a majority of other parties in the northeastern Spanish region are calling for a November 9th ,2014 referendum that would ask voters two questions:

Many Catalans point to Scotland, whose leaders have called a referendum for September on independence from Britain — a move authorized by the British government.

The proposal appears doomed from the start, however, given that a Catalan independence referendum is opposed by Spain's two largest national parties: the ruling conservative Popular Party and the main opposition Socialist Party.

Under the current Spanish constitution, referendums can only be called by the national government in Madrid, not by the governments of Spain's 17 autonomous communities, of which Catalonia is one.

"Anyone who would like to change it can propose that, but they most follow the steps and rules that the constitution lays out," he said.

"Spaniards have known no other condition other than unity and we neither want, nor should we, break it."

Catalonia accounts for one-fifth of Spain's total output and an even greater share of its exports.

A recent poll by the Catalonia Centre for Opinion Studies showed that those favouring greater autonomy or outright independence far outweighed those who wanted to stick with Spain.

On September 11th last year, Catalonia's national day, hundreds of thousands of Catalans massed in a vast human chain stretching across the region to demand independence.

The national day recalls the conquest of Barcelona by Spanish king Philip V's forces in 1714.