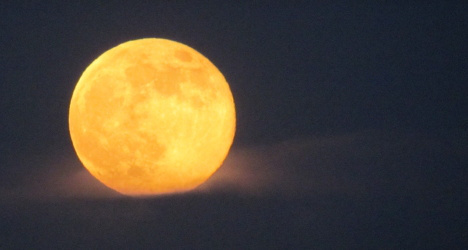 The scientists from the University of Huelva in Spain's south published their observations in the influential Monthly Notices of the Royal Astronomical Society.

It was caught on video by Professor José M. Madeido who was operating two telescopes in the south of Spain's which form part of the  Moon Impacts Detection and Analysis System (MIDAS).

The Royal Astronomical Society reported: “The flash was the result of a rock crashing into the lunar surface and was briefly almost as bright as the familiar Pole Star, meaning that anyone on Earth who was lucky enough to be looking at the Moon at that moment would have been able to see it.”

Madeidoa said, “At that moment I realized that I had seen a very rare and extraordinary event.”

It was so powerful that the afterglow from the superheated rock remained visible for a further eight seconds.

Most lunar collisions are over in a fraction of a second.

“This is the largest, brightest impact we have ever observed on the Moon,” he added.

Madeido and his MIDAS colleague José Ortiz from the Institute of Astrophysics of Andalusia believe that the rock that hit the moon weighed around 400kg (880 pounds) and was up to 1.4m (4.6 feet) wide .

It is estimated to have hit the Mare Nubium crater of the moon at a speed of 61,000 km per hour and to have blasted an impact crater 40m across.

The explosion would have been the equivalent of 15 tons of TNT.

The moon's surface is covered with scars from countless past meteorite impacts.

Unlike the Earth, it has no atmosphere to protect it from space debris.