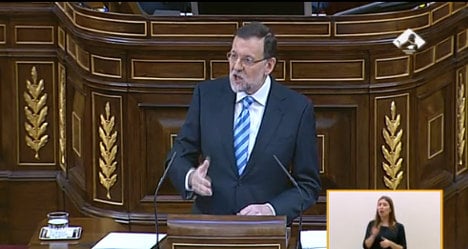 "The GDP growth forecast will be revised upwards. The forecast is that we will reach growth of 1.0 percent in 2014 and 1.5 percent in 2015," he said during an annual state of the nation debate in parliament.

The comments came as part of an upbeat 90-minute speech which was greeted with rapturous applause by members of Rajoy's ruling Popular Party.

In the speech which marks the beginning of three days of intense debate in the national parliament, the Spanish leader focused on improvements in the Spanish economy and stressed the shift from "recession to positive growth".

Spain clocked up positive growth of 0.1 percent in the third quarter of 2013 after nine consecutive quarters of negative growth.

Rajoy mentioned new inflows of foreign investment and affirmed Spain would see net job creation in 2014 while the rhythm of this growth would be "more intense" in 2015.

Firms, meanwhile, would get tax relief in the form of lower social security contributions for permanent staff.

These would total a flat €100 a month for the first three years, but would have to be repaid if the staff member left within that period.

In a nod to Europe, the prime minister stressed the progress towards a banking union and said the euro was here to stay. Noting the approaching European elections, Rajoy said Spain would "contribute to the debate" and there remained "much to do in Spain".

"This government will work towards a fiscal, economic and political union," he added.

During his speech, the Spanish leader referred to the challenge of Catalan independence and reiterated his message that a planned Catalan referendum on self-rule would not go ahead.

But he also said: "I am going to fight for the Catalans, for their progress and their well-being."