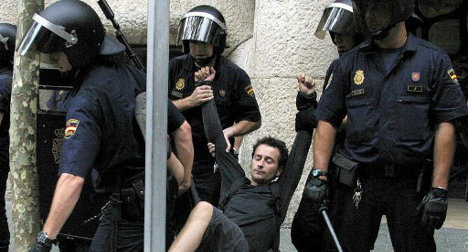 Spain has seen a wave of protests since the draft Citizen Security bill was unveiled by Spain's conservative government in November. File photo: Cesar Rangel/AFP

The proposed legislation includes €30,000 ($41,000) fines for offences ranging from staging unplanned protests outside the Spanish Parliament to penalties of up to €1,000 for playing street football.

Spain has seen a wave of protests since the bill was unveiled by Spain's conservative government in November.

Now Spain's powerful General Council of the Judiciary (CGPJ) has issued a non-binding report saying some of the proposals face a constitutional roadblock, Spain's El País newspaper reported on Tuesday.

Among the chief targets of the CGPJ is a proposal to allow private security staff to carry out police duties such as ID checks and arrests.

The report's authors of the report have also called into question a clause which would make the organizers of a demonstration responsible for what happens during that process.

Concerns have also been raised about a move to criminalize offences against Spain, such as the burning of the flag. This could create a murky area between infractions and crimes, according to the CGPJ.

The draft bill is expected to be go up for the vote in parliament in March.

In December, the European Union weighed in on the debate saying Spain's planned law was "disproportionate" and could infringe on people's freedom of assembly.