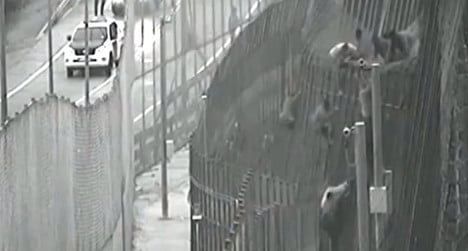 A screen grab of official footage of migrants trying to enter the Spanish enclave of Melilla on Monday.

The 'verbal' ban was originally reported by Spanish daily El Mundo before official word was given by the ministry headed up by Jorge Fernández Díaz.

It follows a storm of controversy after 15 migrants died earlier this month in an incident currently being investigated by a Ceuta court.

Civil Guard officers are alleged to have fired rubber bullets at swimmers who were struggling to reach Spanish territory.

But according to media reports, officers have now been instructed that they should use rubber bullets only in self-defence. They have been told that even shots into the air or the water are not allowed.

The use of blank cartridges 'which only make a noise' has not been banned.

Rumours of a possible ban started on Monday when 100 migrants successfully scaled the fences in Melilla and were not fired upon by the Civil Guard.

Some 30,000 would-be migrants are waiting in Morocco for their opportunity to enter Europe with Melilla and Ceuta being the most popular potential entry points, Spain's El País newspaper reported recently.