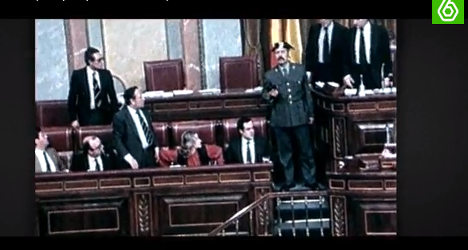 Makers of the documentary promised viewers they would learn the real story behind Spain's failed military coup of 1981. Screen grab: LaSexta

Operacíon Palace was a massive hit with 5.2 million Spaniards tuning in to the documentary about the country's failed military coup in 1981.

Presented by the hugely popular journalist Jordi Évole, the film promised to reveal the secret 'truth' about one of the key moments in modern Spanish history.

Spain's fledgling democracy was just six years old, and struggling to assert itself after the death of long-term dictator Francisco Franco.

Footage of the attempted coup is as famous within Spain as that of the moon landing or the assassination of John F. Kennedy in Dallas.

It shows shots coup leader Tejero brandishing a pistol and firing shots at the ceiling when one politician attempts to tackle officers loyal to the colonel.

The coup ended after King Juan Carlos gave an iconic TV speech in which he urged Spaniards to keep their faith in democracy. By the following day, the political hostages were freed and the coup leaders surrendered to police.

The failed coup, often referred to as 23-F for the date on which it happened, came to represent the victory of democracy over fascism in Spain.

In an Orson Wells-style programme, Operation Palace made the shocking assertion that the coup itself and the king's speech had been staged to boost the king's image.

This caused a storm of commentary on Twitter as people wrote about what they were seeing.

For a couple of hours, the hashtag #operacionpalace hit trending topic status within Spain and internationally.

And then came the big reveal: at the end of the show Évole told the massive audience the whole documentary was a fake. He explained it was based on the French mockumentary Dark Side of the Moon which argued the first moon landing was staged by the CIA.

"I know some of you will happy with what you have seen, while others will feel cheated and want to kill me" said the Catalan journalist in the wash-up to the show.

"At least we admitted that it (the documentary) was a lie and surely there were other times when you were lied to and nobody said so," he added.

The show itself has turned Spain into a nation of 'pro-Evolistas' and 'anti-Evolistas'. Some, like the tweet below are very clear in their praise.

Others, meanwhile have speculated what the fake documentary means for journalism.

"Like many of you I'm asking myself: "Does this type of experiment favour the credibility of the press? Worrying," wrote Twitter user Beatriz Corredor.

Some viewers, meanwhile, criticized the fear-mongering aspect of the programme:

"I'm all for experiments and innovation but you can't play with people's fear as Operation Palace did," tweeted Rosa María Artal.

Others took a more pragmatic view.

"The main result of #operationpalace is that the event has created the biggest number of deleted tweets once people watched the end (of the show)," wrote Twitter user Pepe Oneto.