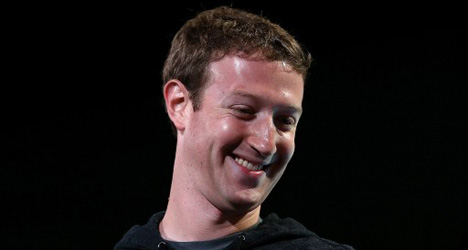 The star of the opening day of the February 24th–27th GSMA Mobile World Congress in Barcelona, Spain, Zuckerberg has come a long way in the mobile world in a short time.

When Facebook sold its shares to the public in an initial public offering in May 2012, "it literally had no mobile advertising revenues," said Eden Zoller, analyst at the research house Ovum.

"It did actually have a pretty strong mobile user base at IPO but what it had failed to do at that time was actually monetise those mobile users," she said.

At the time of the float, worries over the lack of money coming in from the mobile business sent Facebook's shares sliding.

But the social network — boasting more than 1.2 billion members — quickly repaired its strategy.

By the end of 2013, mobile devices accounted for 53 percent of Facebook's advertising revenue, bringing in $1.2 billion in the last quarter and more than $3 billion over the whole year.

However mobile advertising can be "highly intrusive", Zoller cautioned, especially if it interrupts a user's engagement with an application.

"You have to be very careful."

Nevertheless, the social network needs to keep up the momentum, the analyst said.

"It can't be complacent. On the mobile front it is particularly important.

Consumers have an increasing number of social media and social messaging alternatives to Facebook."

The company still has a weak point, however, she added: its failure to carve out a strong position in mobile payment systems, which are expected to show strong growth in the next few years.

Nonetheless, Facebook is clearly building a base for further revenue growth.

News of the sale was soured, however, by a system crash which left millions of users without service for several hours on Saturday evening.

Half a billion users on WhatsApp

"Facebook is paying for one of the fastest growing audiences in history — WhatsApp is now nearing half a billion users globally — and the monetization potential that that brings," said Guillermo Escofet of research house Informa.

Facebook has captured 18.4 percent of the mobile publicity market, making it the number two force after Google, according to digital media analysts eMarketer.

"They performed a remarkable turnaround from about two years ago," said Escofet, recalling the social network's early reluctance to push advertising to mobile devices.

Facebook's solution was to integrate advertising into its users' news stream, where members read the latest events in their "friends"' lives.

It has proven an efficient strategy. Of Facebook's 1.23 billion users who are active at least once a month, three-quarters access the site from their smartphones.

"We are very happy with them," he said.

MassiveImpact's clients publicize on Facebook but only pay when a user clicks on the advertisement and then actually buys the product.

For products such as insurance, the percentage of users who make a purchase after clicking on a web advertisement is often in single digits, but for mobile apps that figure can rise to 20 or 30 percent.

"For app promotion, I think they're definitely the best," Shapira said.

Many advertisers now devote all their publicity to mobile devices, not even spending on Internet advertising, he said.

But "I think we should not get too excited," Shapira cautioned.

"You have to run just to stay alive. So in this market, you have to constantly be innovating and developing new technologies just to survive, if you don't, you disappear."