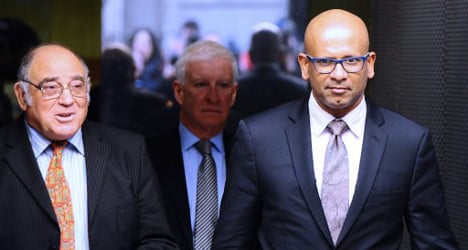 Members of the International Verification Commission leave a court in Madrid on Sunday after being grilled by a judge over the whereabouts of fugitive Eta members. Photo: Tom Gandolfini

Three members of the International Verification Commission were grilled by a judge after announcing Friday that they had overseen Eta militants handing over a small cache of weapons as the first step towards disarmament.

The team released a video shot in January that showed two of its members receiving a table-full of guns and explosives from militants in balaclavas.

The commission's work in monitoring the Eta ceasefire is not recognized by the Spanish government, which like France refuses to negotiate with Eta.

The group, blamed for hundreds of deaths over four decades, announced a "definitive end to armed activity" in October 2011 but Madrid insists it must disband without conditions.

Judge Ismael Moreno summoned the monitors for questioning over the whereabouts of the group's fugitive members.

But the team members told the tribunal they did not know the identity of the militants they met nor where Eta weapons were kept.

Commission head Ram Manikkalingam, a Sri Lankan who once advised his government during talks with Tamil Tiger rebels, pledged to be "transparent" and cooperate with the tribunal.

"We are working for the consolidation of peace and coexistence in the Basque country," he said after leaving the court.

"It has been three years since Eta declared a permanent unilateral and verifiable ceasefire. Eta has upheld the ceasefire and complied with its commitment to end violence.

"Now it is time to seal Eta's weapons and put them beyond operational use," he added.

"Eta has expressed a unilateral commitment to do this… We believe we have a genuine opportunity now," he said, adding that the commission had always worked with the backing of a great majority of Basque society.

Others summoned were Ronnie Kasrils, a former intelligence minister in South Africa; and Chris Maccabe, a Briton who previously worked on the Northern Ireland peace process.

Ahead of their appearance, they met Basque leader Iñigo Urkullu, a nationalist who expressed his "support and appreciation" for the commission's work in "helping Basque citizens to turn once and for all the page of violence".

Pro-independence groups in the region were more vehement, with the head of a pro-independence coalition, Amaiur Jon Inarritu, calling the summons by the Madrid tribunal "ridiculous" and "nonsensical".

The commission was created in 2011 and has since been working behind the scenes in Basque society and had both direct and indirect contacts with Eta itself.

In its statement on Friday, the commission called the handover of weapons "a significant step".

It said the small number of arms — including just four guns and 16 kilograms (35 pounds) of explosives — was the result of constraints caused by operating "in clandestine conditions".

Manikkalingam called on French and Spanish governments to facilitate the process.

Spain's conservative government dismissed the move by Eta, which is classed as a terrorist group by the United States and European Union.

It is blamed for the deaths of 829 people in a four-decade campaign of shootings and bombings for an independent Basque homeland in northern Spain and southwestern France.

It has been much weakened over recent years by the arrests of its senior leaders, with only about 30 of its active members thought to be still at large.