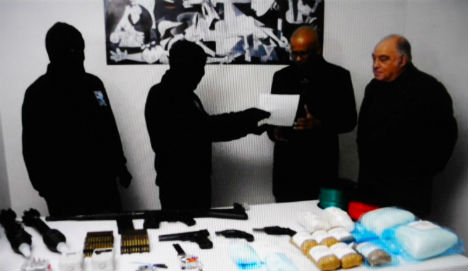 Judge Ismael Moreno at the National Court in Madrid "summoned the six verifiers as witnesses", the source told news agency AFP, referring to the members of the International Verification Commission.

The commission, which includes an Indian, a Sri Lankan, a Briton and a South African, on Friday announced it had verified that Eta had given up a cache of weapons as the first step towards disarmament.

It has been monitoring a ceasefire by Eta but is not recognised by the Spanish government, which insists Eta disband without conditions.

The commission released a video filmed last month of masked Eta members presenting the weapons cache to two members of the commission in an undisclosed location in the Basque Country.

The Madrid judge summoned the six, including the commission's Sri Lankan spokesman Ram Manikkalingam, for questioning on Sunday morning, said the court source, who asked not to be named.

The court wants to question them as witnesses as requested by the state prosecution service, in response to a case brought by Covite, an association for victims of Eta.

Covite said in a statement it had lodged a demand for the court to question the monitors to find out the identity of the Eta members they met "and any information that may be useful for the security forces to detain wanted criminals."

Spanish media reported that police had handed the court orders on Saturday to some of the commission's members, but it was not yet clear whether any would answer the summons.

A spokesman for the commission declined to comment to AFP on Saturday.

Kasrils appeared alongside Manikkalingam in the video inspecting the decommissioned weapons presented by two Eta members.

The other members of the commission are Satish Nambiar, a former Indian army commander; former United Nations envoy Aracelly Santana from Ecuador and the commission's administrator Fleur Ravensbergen from the Netherlands.

It has been much weakened over recent years by the arrests of its senior leaders.