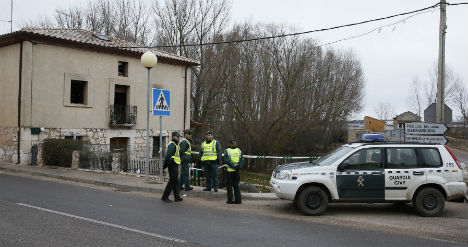 Spanish Guardia Civil stand near a burnt-out house where six people died in a house fire in Tordomar, near Burgos on Saturday. Photo: Cesar Manso/AFP

Firefighters and ambulances rushed to a holiday home in Tordomar, near the city of Burgos, in the night to find the country house in flames and several people trapped inside, rescuers said.

"Medical personnel at the scene confirmed the death of six people — three adults and three minors — apparently from smoke inhalation," the regional emergency services said in a statement.

Medics took five survivors to hospital to be treated for burns and smoke inhalation, including a seven-month-old baby boy and a girl of five, it added.

A government official in Burgos, Jose Maria Arribas, told Spanish National Radio those who died were members of the same family and were staying in the house for a celebration.

Spanish media cited officials saying the blaze was thought to have been started by a spark from a fireplace setting fire to a sofa.

They reported that the children killed in the blaze were aged between four and six.

Regional health authorities said the five in hospital were in a "stable" condition and could be discharged within hours.