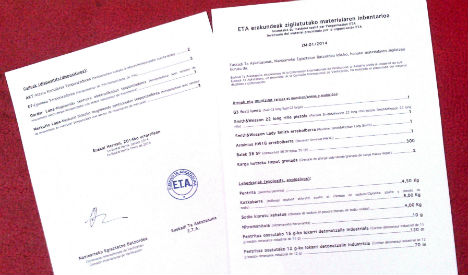 A list of arms, explosives and ammunition held in Eta cashes is displayed during a press conference in Bilbao on Friday. AFP Photo / Rafa Rivas

International monitors on Friday said that a video of Eta members presenting a cache of guns and explosives was a step towards the full disarmament of western Europe's last major violent separatist movement.

The photograph of the two black-masked Eta members behind their table-full of weapons made the front page of most of Spain's main daily newspapers on Saturday.

But the papers said surrendering the cache — including just four guns and 16 kilograms (35 pounds) of explosives, according to an inventory released by monitors — was a ludicrously small gesture by a group blamed for killing more than 800 people.

"It would be simply laughable if it were not pathetic as well as an insult to the victims and to common sense," said right-leaning daily El Mundo in an editorial.

"It was ridiculous of these pacifying experts to lend themselves to a farce through which Eta means to award itself a medal."

Centre-left El Pais, Spain's biggest-selling daily, said the giving up of the weapons cache had little meaning since E had already said it was definitively giving up using arms in October 2011.

"Handing over weapons or putting them out of use does not bring anything new to the guarantees that they will not be used again," it wrote.

"On the other hand it does cause confusion … about what really matters now: the definitive, unconditional disbandment of the group."

Conservative daily ABC titled its front page "The farce of disarmament" and in an editorial branded the gesture "an act of Eta propaganda".

The Basque newspaper Gara, which Eta has often used to publish its declarations, called the group's gesture "a significant step that strengthens the process for a solution" in the Basque Country.

The conservative government of Spain's Prime Minister Mariano Rajoy shrugged off the move by Eta, which is classed as a terrorist group by the United States and European Union.

Gara called the government's rejection of the international monitors' announcement "an act of political childishness".

Eta is blamed for the deaths of 829 people in a four-decade campaign of shootings and bombings for an independent Basque homeland in northern Spain
and southwestern France.

It has been much weakened over recent years by the arrests of its senior leaders.