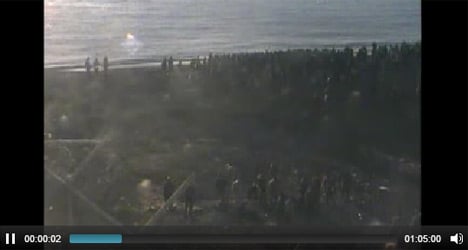 The tragedy took place after Moroccan security forces and Spain’s Civil Guard Police repelled the entry of up to 400 sub-Saharan immigrants into the Spanish city.

Ceuta's Civil Guard police force released short segments of video ten days ago to explain their part in the events which led to the deaths of 15 would-be immigrants from Sub-Saharan Africa.

But critics claimed that the clips left many questions about police conduct unanswered.

Civil Guard officers were said to have fired rubber bullets into the water where people were swimming around a breakwater to reach the beach — a claim they initially denied but later conceded was true.

Despite the death toll, the director of the Civil Guard, Arsenio Fernández, described the action of his officers as "impeccable".

A group of NGOs filed official complaints and a coalition of left-wing parties, including Spain's leading opposition Socialist Party (PSOE), demanded last week that the full five-hour footage should be handed over to the national parliament.

They threatened to launch  a parliamentary investigation if the videos were not released.

The complete video evidence of the force's actions was given to a court in Ceuta on Thursday.

Now the Interior Ministry has published the footage on its website as part of "an exercise in transparency".

Preceding the Guardia Civil security camera recordings is an "explanatory presentation" video by Civil Guard commander Fernando Cubillo  which he claims is to "put into context" what can be seen.

The videos of varying quality show events on the night when

The tragedy in Ceuta has sparked political tensions in Spain with opposition parties calling for detailed explanations about the events.

On Wednesday, Izquierda Plural, a coalition of left-wing and green parties, on Wednesday called for Spain's Interior Minister Jorge Fernández Díaz to step down as a result of the action taken by Civil Guard officers during the incident.