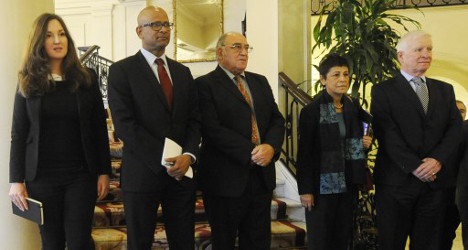 Members of the International Verification Commission (IVC), working behind the scenes on the end of violence in the Basque Country in Bilbao on Friday. Photo: Rafa Rivas/AFP

An expert commission monitoring a ceasefire in Eta's decades-long armed campaign released a video of black-masked members of the group presenting guns, bullets and explosives to monitors.

"The commission has verified that Eta has sealed and put beyond operational use a specified quantity of arms, munitions and explosives," the body's spokesman, Ram Manikkalingam, told reporters in the Spanish Basque city of Bilbao.

"The commission is confident that this step is significant and credible. We believe that it will lead to the putting beyond operational use of all Eta's arms, munitions and explosives," the Sri Lankan spokesman said.

Spain's conservative government shrugged off the move by Eta, which is classed as a terrorist group by the United States and European Union.

"With all respect, we do not need these international verifiers," he told a news conference minutes before Friday's announcement. "The civil guard and police are enough for us."

"It is a small step, it is not sufficient, but it is a first and necessary step towards complete disarmament," the regional president Inigo Urkullu, a conservative nationalist, told a news conference after the announcement.

"This is a step on a journey with no return that should have on its horizon the complete and total disarmament of Eta," he added.