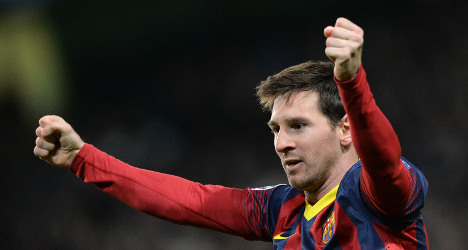 Despite some more unsavoury headlines surrounding Barça's signing of Brazilian forward Neymar, which saw the club indicted over an alleged tax fraud on Thursday, the mood in Catalonia is positive after they overcame a huge hurdle by beating Manchester City 2-0 away in the first leg of their Champions League last-16 tie.

That match continued Gerardo Martino's men's impressive return to form in recent weeks after a shock 3-2 defeat to Valencia at the beginning of the month.

However, midfielder Sergio Busquets has warned against reading too much into his side's upturn in the past few games.

"After the game against Valencia it seemed as if the world had ended and now, three weeks later, it seems as if everything has changed, but it is not like that. We are not now suddenly in our best form, nor were we in our worst before," he said.

Yet, with Barça tied at the top of La Liga with Atletico Madrid and Real Madrid on 60 points, Busquets knows his side cannot afford a similar result this time round.

"Any draw or defeat will penalize us in the league. Real Sociedad have a great team and it will be difficult for us."

Left-back Jordi Alba is a doubt for Barca due to a hamstring injury, but otherwise Martino has a fully-fit squad to choose from and Neymar could be handed his first start since returning from an ankle problem.

Real Madrid are the first of the title contenders in action this weekend as they host relegation-threatened Elche earlier on Saturday.

Los Blancos have had a rare midweek off as they don't return to Champions League action until Wednesday when they travel to Schalke.

Carlo Ancelotti's side will again be without the services of the suspended Cristiano Ronaldo as he completes his three-game ban so the in-form Jese Rodríguez and Karim Benzema will continue to partner Gareth Bale in attack.

Like Barcelona, Real are still in the running for a potential treble of La Liga, Copa del Rey and Champions League.

And with his side unbeaten in their last 25 games in all competitions, defender Dani Carvajal acknowledged that the treble is a realistic target for Madrid this season.

"I would give everything to win the treble, but it is not easy to win three titles. We will fight for it and give our all until the end to achieve it," he told the club's website.

"We are in the midst of the months in which you play for everything. Real Madrid always try to win everything and within the squad we feel very strong. I don't want to say that we are favourites, just that we are one of the candidates to win these three titles."

Atletico will be in confident mood after also winning on the road in Europe in midweek as they beat AC Milan 1-0 at the San Siro on Wednesday.

However, Diego Simeone's men face a stern test if they are to maintain pace with their more illustrious rivals when they travel to Osasuna on Sunday.

Osasuna have already taken points from both Barça and Real at home this season. Moreover, five first-team regulars for Atletico, including top scorer Diego Costa, will need to be careful as they are just one booking away from missing next week's Madrid derby against Real.