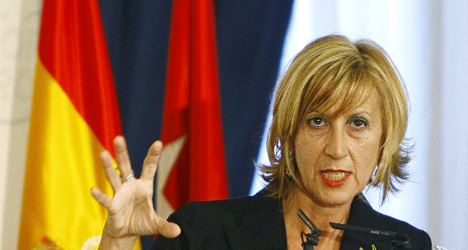 The move to block Catalonia's referendum on self rule was spearheaded by the anti-nationalist Union, Progress and Democracy party led by Rosa Diez. Photo: Philippe Desmazes/AFP

The motion was presented in the parliament's lower chamber by the Union, Progress and Democracy party (UPyD) which opposes both Catalan and Spanish nationalism in favour of a 'European federation of citizens'.

It was passed by 272 votes to 43 and received the backing of both the ruling right-wing Popular Party (PP) and the main Socialist opposition party, the PSOE.

Only the left-wing–green alliance known as the Izquierda Plural voted against the motion.

The vote represents the first official parliamentary rejection of the separatism process started by the Catalan parties Convergence and Union (CiU) and the Republican Left of Catalonia (ERC).

They have announced their intention to hold a referendum on November 9th in the north-eastern region of Catalonia on the subject of independence from Spain.

Catalonia's regional parliament in January voted in favour of asking Madrid whether the region could hold the referendum, but this was widely expected to be blocked in Madrid.

Spain's Prime Minister Mariano Rajoy has previously said of the referendum plan, "It is unconstitutional and it will not take place."

"This initiative collides head-on with the foundation of the constitution which is the indissoluble unity of the Spanish nation," he added.

Today's rejection was described in parliament as "swift and decisive".