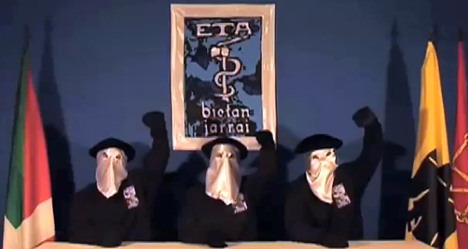 In October 2011 it announced "the definitive end to its armed activity" but it has refused to formally disarm or disband as the Spanish and French governments demand.

This month however it said it plans to make "significant contributions" towards a lasting settlement to its armed independence campaign.

The International Verification Commission, a group of five statesmen working to settle the fate of the group, announced a visit shortly afterwards.

The commission said it would give a "very significant and positive" message on Friday after meeting with Basque political parties.

"It will have to do with the next step in the issue of peace," a commission spokesman said.

This has been widely interpreted in the Basque country as meaning a step towards disarmament.

The Basque conservative regional government "hopes that the new announcements this weekend will be serious and trustworthy and will not be restricted to token or symbolic gestures and declarations," said the Basque government's secretary general for peace, Jonan Fernández.

Any announcements must "represent firm deeds with a view to the disarmament and disbandment of Eta", he said on Wednesday.

Classed as a terrorist group by the United States and European Union, Eta has been weakened over recent years by the arrests of its senior leaders in Spain and France. Only about 30 of its active members are thought to be still at large.

Over recent months Eta members have raised sensitivities in Spain by trying to gain concessions from the Spanish government over prison conditions.

But the government refuses to negotiate with Eta and Spain does not recognize the International Verification Commission, a group of statesmen who is working to settle the fate of the group.

In a statement in December a collective representing hundreds of jailed Eta members gave ground on one of the most sensitive aspects of the stand-off — the terms of their jailing and potential release.

It said the prisoners dropped their long-standing demand for a general amnesty and said it would consider letting them negotiate individually for release.

The pro-independence party Sortu, formed by former members of the outlawed party Batasuna, hailed that as "a turning point".

The Spanish and French governments have ignored Eta's request to negotiate its disbandment on conditions such as transferring prisoners to jails closer to home.

But hopes of progress were raised on January 11th when rival Basque political parties joined together in a demonstration supporting that demand.

Then on February 7th Eta  promised "significant contributions" towards a lasting settlement "without delay".

"These are all little steps and I think that soon they will take an important step, perhaps more important," said Gorka Landaburu, a specialist in Basque affairs.

The five-member commission is led by a Sri Lankan, Ram Manikkallingam, and includes a South African, two British experts and an Indian.

Formed in 2011, it has resumed work on the Eta question after a pause following the breakdown of efforts to solve it in Norway last year.

Specialists say the new announcement could give details of the locations of Eta arms caches — most of which are thought to be in France — or that Eta could at least promise to do so.

"They won't be talking about disbanding yet," Landaburu added.